Jerry Lewis, the high prince of low-brow comedy on stage and in movies as well as a fundraising powerhouse with his annual Labor Day telethon, died on Sunday (August 20) of “natural causes” at the age of 91, his family said.

“Famed comedian, actor and legendary entertainer Jerry Lewis passed away peacefully today of natural causes at 91 at his home in Las Vegas with his family by his side,” a statement from the Lewis family said.

Lewis, who rose to fame as goofy foil to suave partner Dean Martin and was a comic icon in France.

He had a movie revival in 1983, winning acclaim as an arrogant talk show host kidnapped by an obsessed fan in “The King of Comedy.” 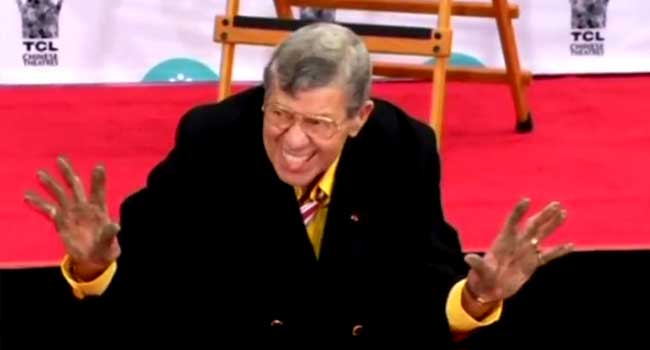 He scored another late-career triumph with his 1995 Broadway debut in a revival of “Damn Yankees” and appeared in the film “Funn Bones” that same year.

He was 87 when his last movie, “Max Rose,” came out in 2013, playing a jazz pianist who questions his marriage after learning his wife of 65 years may have been unfaithful.

The son of vaudeville entertainers, Lewis became a star in the early 1950s as Martin’s spastic sidekick in nightclubs, on television, and in 16 movies.

At their height, they set off the kind of fan hysteria that once surrounded Frank Sinatra and the Beatles.

Their decade-long partnership ended with a bitter split and Lewis went on to star in his own film comedies.

Lewis’ movie persona, like the character he created in the act with Martin, varied little from film to film. He was zany and manic, forever squealing, grimacing and flailing his way through situations beyond his control.

He starred in more than 45 films in a career spanning five decades. His cross-eyed antics often drew scorn from critics but he was for a time a box-office hit who commanded one of the biggest salaries in Hollywood.

Long after his celebrity faded at home, Lewis was wildly popular in France, where he was hailed as “le Roi du Crazy” (the king of crazy) and inducted into the Legion of Honor, France’s highest award, in 1984. He received a similar honor in 2006.

Lewis used his celebrity status to call attention to causes including the Muscular Dystrophy Association. For decades, he had a Labor Day telethon, raising in excess of $2 billion for the fight against muscular dystrophy.

He first started doing telethons for the Muscular Dystrophy Association in 1952 before retiring from the job in 2011.

His publicist, Cazau, said in an interview that over the years, his telethons had raised $2.45 billion.

Lewis was beset for years by numerous ailments, including heart attacks, an inflammatory lung disorder and chronic back pain caused by pratfalls earlier in his career.

Lewis had homes in Las Vegas and San Diego. He had six sons with singer Patti Palmer, including Gary of the rock group Gary Lewis and the Playboys. After a divorce, Lewis married SanDee Pitnick in 1983, with whom he adopted a daughter.

Time To Take Back Our Mosques

To Build A Great Nation

MEA Retail Banks Are The Strongest Believers In A Cashless Society