Few days after world Cup bound Super Falcons walloped their Icelandic counterparts 6-1 in a friendly match in Spain, the Thomas Dennerby tutored side failed to continue the run  losing 2-1 to Canada at the Pinatar Arena on Monday.

Interestingly Super Falcons shot into the lead in the encounter thanks to Desire Oparanozie who found the net after enjoying a timely assist from Uchenna Kanu in the 26th minute.  Oparanozie’s goal was beautiful to watch as she calmly displaced the goalkeeper Erin McLeod before placing the ball neatly in the right hand corner.

The falcons only managed to maintain the lead for 45 minutes before Janine Beckie leveled up for Canada in the 46th minute.

Sophie Schmidt increased the tally for Canada in the 54th minute and the Canadians held tenaciously to their lead to the final whistle. 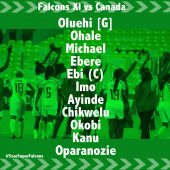 Match Statistics indicate that the Canadians had a better outing maintaining 66.8% to 33.2% posted by the Falcons. They had nine shots on target to Falcons four, and perhaps would have increased goal tally but for a number of impressive saves made by Falcons goalkeeper Tochukwu Oluehi.

Coach Dennerby made five changes in the course of the encounter bring in Rasheedat Ajibade, Iniabasi Umotong,Ogonna chukwudi,Alice Ogebe and Chinaza Uchendu for Ngozi

Akobi,Uchenna Kanu,Halimatu Ayinde,Anam Imo and  Desire Oparanozie respectively. Falcons have played no fewer than a dozen matches since winning their 9th   African Women’s Nations Cup in Ghana as part of preparation for the World cup less than two months in France.

Buhari’s Eight Years Is A Passing Phase; Nigerians Should Endure –...

Presidency Kicks off consultation with Experts on the Petroleum Industry Government...