Brexit day is here but Britain isn’t leaving the EU, at least not yet | Statesman Nigeria
CLOSE

Friday is the day that, under a timetable set all the way back two years ago, Britain was supposed to leave the European Union.

March 29, 2019 had been slated as a landmark moment in the country’s history, to be at the same time both celebrated by pro-Brexit politicians and voters and mourned by those who wanted to remain in the EU.
Lavish parties had been organized to mark what some had called the UK’s own “independence day.”
Now, thanks to a failure of Theresa May to get Parliament to back her Brexit deal, today has turned out to be slightly more chaotic than planned.
The only thing clear is that Brexit is not happening Friday — and it may not even come next month or in May, but in a year’s time. 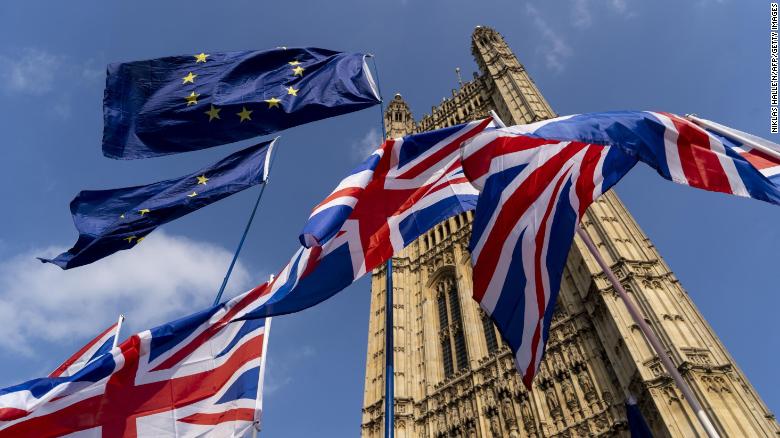 Union and EU fags flutter outside the Houses of Parliament in Westminster, London on March 28, 2019.

On Friday, supporters of Brexit are planning to mark this one-time landmark day with demonstrations outside Parliament in protest that their prize has, for now, eluded them.
Under the terms of an extension agreed by Brussels last week and approved by parliament on Wednesday, Britain’s departure will not now happen until April 12, if there is no deal, and May 22 if there is.
Yet, depending on what happens in the House of Commons today, there is a possibility that the delay could stretch to a year if there is no break to the deadlock.
If this threat was supposed to focus minds and persuade more lawmakers to back the Prime Minister’s Brexit deal, it has, so far, not worked.
Without the backing of the Democratic Unionist Party (DUP), or the opposition Labour Party, May simply cannot get her deal over the line. Instead, the government has broken down the deal into two parts in the hope of picking up more support.
UK parties ‘at risk of not surviving’ Brexit
Lawmakers will vote on the withdrawal agreement — which will enable the technical process of leaving the bloc — while the second half, the political declaration setting a framework for the next steps, will be presented to parliament at a later date.
This maneuver, announced by ministers yesterday, serves two purposes: Firstly, to get around a block imposed by the Commons Speaker, John Bercow, on trying to get MPs (members of Parliament) to vote on the deal for a third time — after two previous parliamentary defeats; and secondly, to make supporting the deal more palatable for its critics.
If the withdrawal agreement vote passes Friday, Brexit is extended to May 22, when the UK leaves the EU with a deal. If it fails, the April 12 deadline is looming — and a no deal on that day is still on the table.
Yet as of late last night, both the DUP and Labour remained strongly opposed to voting for the withdrawal agreement in its current form.
Labour leader Jeremy Corbyn said offering his party’s support would be akin to backing a “blindfold Brexit” because there would be no opportunity to influence the nature of the UK’s future relationship with the EU. 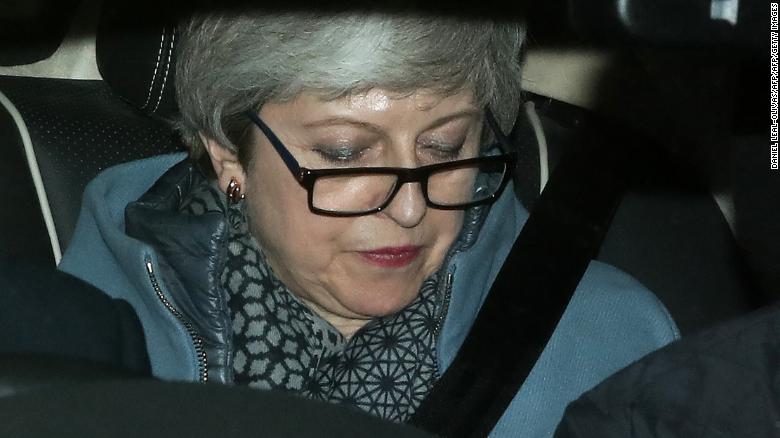 Britain’s Prime Minister Theresa May arrives at the Houses of Parliament in Westminster, in central London on March 27, 2019.

Why go ahead with the vote?

It seems like a last-ditch attempt by the Prime Minister to finally deliver Brexit could backfire.
Which begs the question, why is May going ahead with the vote at all? Well, without a vote today the April 12 timetable would kick in anyway — and Britain would be preparing to leave the EU without a deal in two weeks’ time, unless an alternative option miraculously emerged.
This alternative option could still materialize — regardless of the outcome of today’s vote — if and when lawmakers have a second round of indicative votes on Monday, which could signal support, potentially, for a softer Brexit plan.
This would still need to be accepted by the government, as well as approved by Brussels — two very high bars.
Above all, by having a vote on the withdrawal agreement today, the Prime Minister is showing EU leaders that she is trying all means necessary to make Brexit happen with a deal.
If, as expected, today’s vote fails, then the UK is on course to leave the EU on April 12.
Except there is growing speculation that the EU could offer May’s government a take-it-or-leave-it option of either crashing out with no deal on April 12 or accepting a longer delay of up to a year.
A year’s delay would mean the UK taking part in European elections on May 23, as well as triggering anger among Brexiteers.
Will this threat be enough to concentrate the minds of pro-Brexit Conservative lawmakers and the DUP who are together still holding out on supporting the government in today’s vote?
Given nothing has worked previously to break Britain’s parliamentary deadlock, don’t count on it.
Yesterday, the EU’s chief negotiator Michel Barnier reportedly told diplomats that a no deal Brexit is now “the most plausible outcome” — and it is easy to see why.

Local meter manufacturing up by 100%

Leadership Should Be In The Hands Of Those Who Have Been...

Nominating Uzodinma In 2019; A Political Masterstroke By The APC,...

There Are World Class Experts Here, We Must Build Local Capacity...